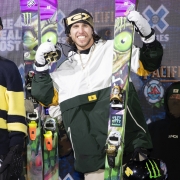 “For sure the best jumping I’ve ever done in my whole life,” Harlaut said, “and I did two or three jumps that I’ve never done before.”

Harlaut elaborated on what made his night so special. In typical Harlaut fashion, the Swede said the “phattest” trick of the night was his switch dub bio 1620. The trick required him to execute two bio flips, a difficult forward-leaning cork that looks super stylish, landing backward. “I thought about it for a while,” Harlaut said of the trick, “and I did the first two switch 16(20)s eleven years ago. And I haven’t done one since or tried one since. Just pulled it out when it counted. Tweaked it a little bit, added a little bit of sausage flavor to it.”

At the sight of the win, which gave the popular Swedish superstar Harlaut a record 12th X Games ski medal, the 28-year-old veteran threw his skis, poles and gear to the snow in celebration. Once he was corralled by X Games reporter Jon “DC” Oetken of Breckenridge, Harlaut summed up another magical night in his transcendent career. During his moment in the spotlight, Harlaut deferred credit to the ski legend who inspired him, Tanner Hall, when asked about surpassing the legend Hall’s record. “Tanner is the greatest of all time,” Harlaut said. “He’s for sure the best. I don’t know if it really counts, because we have more chances to get medals. Tanner would dominate back to back to back. Shout out to ski boss. Thank you for the inspiration.”